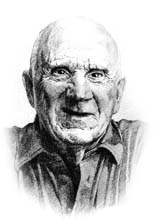 Claude Pattemore won more provincial, national and international golf titles than any other Canadian. At age 21 he was almost killed and became totally blind, in a dynamite explosion in 1948. Three years later a friend insisted Pattemore take up golf and the following year he was Canada’s best golfer and for more than 20 years was one of North America’s premier players. He captured the 1963 U.S. Blind Golfers Championship. He won a dozen Canadian titles and 14 Ontario crowns, all between 1952 and 1972. Pattemore won the Grand Slam, taking the 1963 Canadian, U.S. and International Championships and carded a Canadian record score of 86 in competition. He had a personal best score of 78 on Hamilton’s municipal Chedoke Beddoe Course. Pattemore was elected to the Canadian Golf Hall of Fame in 1996.