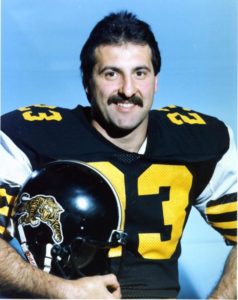 Following a brilliant 14-year career as a Hamilton Tiger-Cat receiver, Rocky DiPietro is among the greats in the history of the Canadian Football League. The native of Sault Ste. Marie and former University of Ottawa Gee Gee, he became the CFL’s all-time pass reception leader in 1989 and his career stats total 706 receptions for 9,762 yards and 45 touchdowns. Three times DiPietro surpassed 1,000 yards in a season. He played in four Grey Cup games, winning in 1986. He was the outstanding player twice, a two time All-Canadian and won numerous other league and division all-star honours. DiPietro entered the Canadian Football Hall of Fame in 1997. He is also on the Tiger-Cats Wall of Fame.