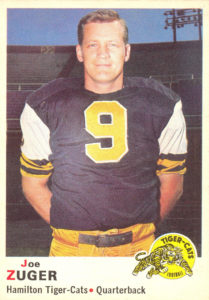 Joe Zuger was an outstanding Hamilton Tiger-Cat from 1962-71. The former Arizona State Sun Devils quarterback passed for 12,676 yards and 76 touchdowns for the Cats. In his fist game as the Cats starting pivot he threw for a professional record 8 touchdowns in a 67-21 demolition of Saskatchewan. He passed for a club record 572 yards in his debut. Zuger also excelled as the club’s punter and averaged 45.5 yards per kick. Three times he averaged more than 48 yards over an entire season. When he wasn’t throwing or punting the pigskin, he played defensive back for the Cats. Zuger played in five Grey Cup games, winning three of them. In the 1967 Centennial Year win over Saskatchewan, Zuger was the game’s MVP. He later became the team’s General Manager and won another CFL title in 1986.